Poole Pottery is a pottery brand and former manufacturer, based in Poole, Dorset, England. As a company, it was founded in 1873 on Poole quayside, where it continued to produce pottery by hand before moving its factory operations away from the quay in 1999. Production continued at a new site in Sopers Lane until its closure in 2006.

Historical products from Poole Pottery are displayed in the Victoria and Albert Museum in London. The pottery has recently restarted production at its new factory in Burslem, Staffordshire, and the Poole Quay pottery studio and shop has reopened.

Robert Jefferson joined in the 1950s, and alongside such artisans as Leslie Elsden (designer of the “Aegean” Range), Guy Sydenham, thrower and designer of the “Atlantis” range, Tony Morris, developer of the early “Delphis” Studio wares with Jefferson, and paintresses such as Carol Cutler, Diana Davies, Ros Sommerfeld, Ann Godfrey and others, including the three Wills sisters, Laura, Julia and Carolyn, produced two lines which are probably the most famous of all Poole’s output: Delphis and Aegean.

Delphis is easily recognised: it is psychedelic, with vibrant colours and designs inspired by artists such as Mondrian, Warhol, Matisse and Pollock. Aegean is more subtle, with the sgraffito technique used to create the “silhouette” patterns that make this range so recognisable.

A new company trading as Poole Pottery was later formed and produced many of the old designs and styles of the original pottery.

Poole Pottery (Carter, Stabler and Adams) produced two-coloured tableware from the 1930s, but had to stop production during World War Two. When they re-launched the range in the late 1940s, they named it Twintone. Twintone was used on three shapes of tableware, many table accessories and a whole host of decorative ware right up to 1981. 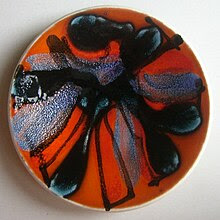 The Poole Delphis range, launched in 1963, was initially conceived by Guy Sydenham and Robert Jefferson and later developed by Jefferson and Tony Morris. Every piece is pretty much unique, with designs created by the decorators themselves.

Introduced in 1970, Aegean utilises spray-on glazes in a wide range of techniques (sgraffito, silhouette, mosaic, flow line and carved clay) and patterns (from pure 1970’s abstraction to more figurative images of fish, leaves, boats and pastoral scenes). Initially thought of as a replacement for Delphis, it was never as successful.

Poole Pottery giftware is currently created using “Living Glaze”. This involves the application of different glazes which react with one another to achieve unique results on each piece.